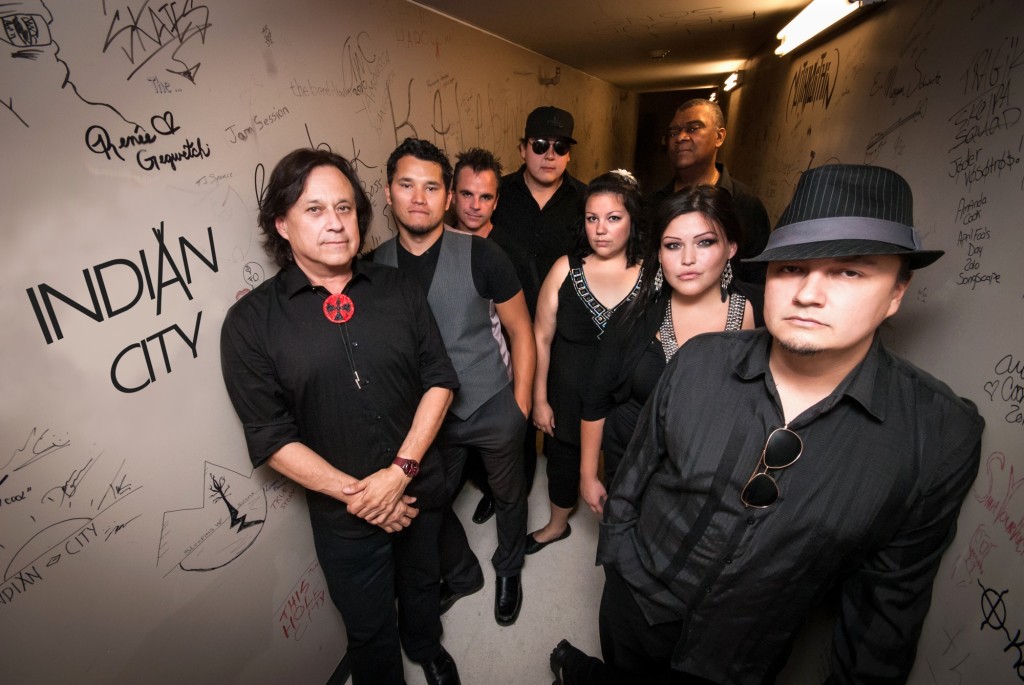 May 15th marks the date when Indian City and Camerata Nova come together at the West End Cultural Centre for a unique music collaboration. Kind of a east-meets-west or north-meets-south. Red & White Unplugged promises to be a wonderful night of firsts. Pop acoustic meets modern vocal tradition, arriving on the canvas of live stage. Cool stuff I think!  How did all this come about?

Back in 2009, I met Andrew Balfour for the very first time through the Winnipeg Symphony Orchestra. The WSO had presented its first Indigenous Festival which had looked to program indigenous themes and music. I was instantly impressed with Andrew’s compositions and solid on-stage presence. I was equally impressed with his compositions such as Wa Wa Tey Wak. We went on from there to arrange a few music pieces from my band Eagle & Hawk. It was a great learning experience for me to see another artist in their mode of creativity. One of the commonalities Andrew and I shared was the commitment to present and share our expression of the “indigenous experience.”

What does that mean? I think it’s a simple answer. We both wanted to highlight the heritage of our peoples through music. Whether it meant new expression or researching legends or digging deep within ourselves to be that voice or beacon. It was wonderful to be part of that process that I think every artist hopes and longs for. Andrew’s compositions remain a marking point of great imprints in our music history.

I’ve had that great fortune to write and compose some music that has been recognized and celebrated. Since 1994—yes 20 years now—I’ve sat at the front line of my music group Eagle & Hawk (E&H). Eagle & Hawk has gone on to capture audiences throughout Canada, the US and even Europe.

I consider that the reason that might have been was the newer music fusion I tried to template as “the sound.” I used indigenous elements such as vocal chants, beats and indigenous themes to create this. Songs such as “Dance” and “Sundancer” became anthemic and synonymous across “Indian” country and mainstream for that unique “native sound.”

People have asked me about the name. I said it sounds better than “Aboriginal City”! Actually, personally, I don’t have an issue with the “I” word.

Back in 2011, when E&H appeared to have peaked one more time and several members were talking time away, I had been thinking about new outlets. I had just released my first solo CD titled Vince Fontaine: Songs for Turtle Island. Turtle Island is what we refer to as all of North American so in a sense I was composing songs for all of Turtle Island.

That CD earned me the honour of Aboriginal Songwriter of the year at the Canadian Folk Music Awards. It was a real honour for sure. The CD was more instrumental in nature. So to continue the forward musical journey, what I thought I needed now was some great vocalists and a new group.

I was watching APTN’s AB Day Live on TV in my hotel in Ottawa. I heard the big hulking baritone voice of Mr. William Prince. He could sing, play guitar and entertain the audience of 10,000.

Shortly afterwards that summer I was a judge at a Manitoba Music talent show. And there she was…that great stage presence and “The voice.” Meet Pamela Davis from Ebb&Flo First Nation. She told me she was the queen of karaoke.

I’ve known rising star Don Amero for some years now and it was a given we would collaborate. Don was featured on our debut CD. Between myself, long-time producer and friend Chris Burke-Gaffney (Chantel/McMaster & James), we recorded Supernation. The media dubbed Indian City the new “Super group.” I just called us the super group of people who were musicians.

I really loved this chemistry and music community which, in a sense, reinforces Indian City as more than just a group but as a music community. I was very fortunate to be surrounded by this great new talent.

The rest of the band rounded out with brother and sister Atik and Neewa Mason who were no strangers to accolades landing a Juno back in 2006. Veteran and well-known keyboardist Gerry Atwell has been a long-time alumni of Eagle & Hawk and is now part of the core of Indian City. Veteran and versatile drummer Steve Martens joins us for the Red & White concert

Indian City (IC) songlist—What can we hear with IC

I think we will hear wonderful, thought-out roots pop fusion numbers loaded with indigenous imagery with songs like “Sunrise,” “Colors,” “Duet,” “Sundancer,” “Speak to me in dreams” and “Dance” (featuring Coco). Some of these straight-up pop songs come from our newly released CD titled Colors.

Indian City will be joined by featured guests Ray “Coco” Stevenson, who is one of the most respected powwow and traditional singers in our community, and new Indian City recruit Jeremy Koz, who has all the goods to set him off to become “best new crooner.”

I had my first meeting with Andrew and Mel Braun, Camerata Nova conductor and music arranger back before Christmas. I was very excited when I left the meeting. I thought to myself: “What a gig!” Best vocals on stage with my little idea to find a new group.

Red & White indeed. Red with pride and White with confidence. May 15th is the date. Hope to see you out.