Local professor, writer and poet Sue Sorensen has written a response to our world premiere of Taken. Read it here: Impressions of Taken

While listening to Camerata Nova and friends craft the innovative choral music of Taken on March 4 and 5 in Winnipeg, I tried to find new words for the kind of optimistic but painful healing ritual, the harmonic gift we were all experiencing, both listeners and musicians. “Spirit of generous collaboration” was the phrase I kept coming back to, but I wanted it to sound newer and bolder than that: collaborosity? That Indigenous composers could be so fearlessly giving in their relationship with a choir made up of white singers was humbling and inspirational. The concert program, conducted by Mel Braun and conceived by Andrew Balfour to be part of Camerata Nova’s contribution to the Truth and Reconciliation process, is a naming of the fact that, as Balfour says, “this country has been built on crushed languages and cultures” but also we can now begin to imagine an alternative version of “this country called Canada.”

“This is a turning point,” said Balfour in a composers’ pre-concert talk. “Change is slowly, slowly happening. And we can’t always talk about this, so that’s why we also have music.” Maliseet singer Jeremy Dutcher, whose Maceptasu (“It is taken away”) is his compositional debut, noted that his piece asks the question “How do we move forward together?” and that we don’t yet know how to answer that. Composer and singer Lindsay Knight, from Muskoday First Nation in Saskatchewan (who raps under the name Eekwol), said this: “To be taken from a homeland is a lot of strain on the human spirit.” But she also displayed astonishing hopefulness when she said (not once, but twice), “We are all compassionate people.”

I hope this is true, and there was certainly an enormous amount of compassion and wisdom in the room during the two performances of Taken I experienced. In the midst of the longest work on the program, Balfour’s Qaumaniq, I strongly felt the truth of this fact: that if even one person is taken away from a community, everyone feels the loss. Balfour’s work, which might be called a short dramatic oratorio or, he said, a “quasi-opera,” presents the encounter in 1576 of Martin Frobisher (sung by Jason Klippenstein, in devastatingly powerful voice) with Ana, a woman of what is now called Baffin Island. When Fred Ford as narrator gravely stated, at the work’s conclusion, the words “She was taken,” one striking effect was that Ana’s song (offered by the awe-inspiring Resolute Bay singer Madeleine Allakariallak) was still hovering in the air around us. And it was important that Allakariallak was still there for us to see, even if we had been told of the loss of Ana. For, as the narration of Qaumaniq says, “the songs of sorrow will stay with us forever.” 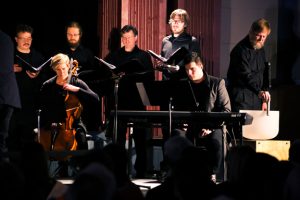 Aside from Qaumaniq, there were two other new compositions at this concert, plus other offerings by Eekwol and Jeremy Dutcher. The entire aesthetic of the program was cross-hatched with multiple textures: the sounds were unexpected, personal, mournful, gutsy, full-hearted, even funny. If there was any sense of discord in the music — as in Eekwol’s Taken, where her own powerful and striking rap was offered against the choir’s backbeat of sampled fragments of Canadian “white” pop classics — the dissonance made sense. The contrasts were necessary and good. After all, as Eekwol sang: “Nobody can say when it’ll all come together / Maybe tomorrow, possibly never.”

We’ll need to hear each other’s songs over and over to understand their complexity and full meaning. The questions we’ll continue to encounter are many: how, for example, can one remain firm in non-violent intention when faced with tremendous harm and injustice? What can reconciliation really mean when we are only beginning to know the residential school story and the consequences of the destruction of so many Indigenous languages? “Can you imagine,” said Madeleine Allakariallak in the pre-concert talk, “a community with no kids because they’ve all been taken away to school? Can you imagine it?” No, most of us cannot. So it is appropriate that Eekwol’s lyrics for Taken include the dark lines “Once we are stolen there’s no coming back / Spirits too far, too far from their land.” And when she asks what it means to give back “what was taken when it’s no longer there,” I feel the hollowness of some of our good intentions. 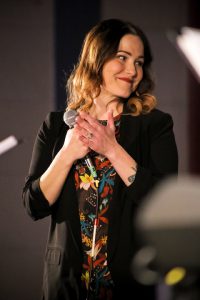 Yet the impact of Taken helps us forward in the essential imaginative work that Canadians of all sorts must nevertheless attempt. To be able to hear each other’s songs — and not only to hear them, but to be gifted with them — is a tremendous first step. Andrew Balfour was even generous enough to offer the opinion that “we are all Anishinabe — we are all The People” and, with my Danish and Scottish and Finnish blood I wondered if I could or should accept that offering. But today, a few days after the concert, I realized I was singing to myself the Mi’kmaq Honour Song so gorgeously performed by Jeremy Dutcher. As Dutcher sang it, the Honour Song was already translated: into Dutcher’s endangered language, Maliseet, and into his handsomely hybrid musical tongue, a graceful movement between the heritage of European classical, traditional Indigenous, and even pop and jazz musical languages. And so perhaps it can be translated again, into a range of musical registers, into the hearts and minds of a variety of peoples. Because what does the Honour Song celebrate? Respect for the earth, the creator, for self and other, for the roots of our communities.

Dr. Liz Przybylski, who teaches Ethnomusicology at the University of California, Riverside, is a former Camerata Nova singer researching the way compositions like Andrew Balfour’s Qaumaniq “bring forward aspects of a Western Art Music tradition, drawing on a long legacy of choral music” at the same time as he works within the “living traditions” of Indigenous music. The notion of “living Indigenous tradition” is important; Przybylski told me that “often, the way people talk about Indigenous cultural practices is to associate these with the past – and here is the key difference – at the expense of hearing these practices as part of contemporary culture and the culture of a Canadian future.” 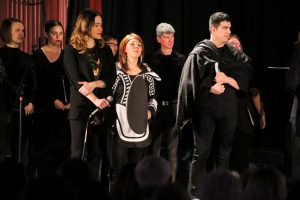 I have some particularly resonant memories of the Winnipeg Taken concerts. Highlights include the sage musical advice of the cello line offered by Leanne Zacharias throughout: in my opinion, a cello never lies, and the sombre loveliness of the atmosphere Zacharias created was so valuable. Jeremy Dutcher’s singing, in his own pieces and in the role of Shaman in Balfour’s Qaumaniq, was a keening of great beauty and an eerily splendid expression of hope. I loved seeing Jason Klippsenstein, who sang the difficult role of the explorer Frobisher, join with the entire ensemble in the encore presentation of Eekwol’s expansive and moving song Ghosts. Everyone was singing — everyone — and this was vital. I recall with fondness Fred Ford’s narration for Qaumaniq, and especially these lines: “The seals were troubled” about the “wolf men of the east.” Ford’s silapaaq and the amauti-inspired outfit worn by Madeleine Allakariallak were attractive traditional garments that instantly identify them as people of certain places: Baker Lake, in Ford’s case, and Baffin Island for Allakariallak’s character Ana. That sense of place is critical. The entire Taken program is not about abstract issues or concepts, but about real people in real places.

Because so much of what we heard during Taken was about the impact of residential schools and other repressive cultural practices on the Indigenous family, I loved seeing Lindsay Knight at the Sunday concert sitting in the audience with her children and partner, right up to the time she went on stage to perform, coming back immediately to see her family as soon as she was done. I shook her small son’s hand and thanked him for sharing his mother with us, and then the family went about its own business. As it should.

I find that I have said relatively little about Camerata Nova as a choral ensemble. They sang beautifully, as they always do. Theirs is a soaring and haunting musicality which also responded to the challenges of the material by offering breezes, clicking, and rustling sounds as needed. In Andrew Balfour’s Qaumaniq there was a quotation from Shakespeare’s The Tempest: “the isle is full of noises … that give delight and hurt not.” An apt description of the music of Taken: many of these issues do hurt, but the music heals.

Sue Sorensen is a Winnipeg English professor, novelist, and poet; she is also a member of the Camerata Nova board of directors.