Run, Freddy, Run! is second installment in a set of pieces that looks at Manitoba’s heirloom bison culture. The text is constructed form bison themed varia copied down during my post PhD gap year in Winnipeg. One can’t get far in MB without encountering a bison branded object, organization, business or activity. For example, I attended Nature Manitoba’s The Natural And Unnatural History Of Bison In Mb lecture by Dr. Dr. Randy Mooi, Curator of Zoology at The Manitoba Museum. Business as usual for a Tuesday evening in Manitoba. 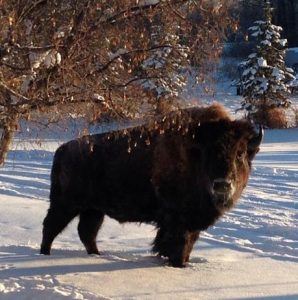 Myself and a group of nature enthusiasts crowded into room 31 at Kelvin High School (I think I even paid full price as a non member!). The lecture ran late. As expected, bison are awesome. As it turns out, bison are a handful and every so often the herd produces a particularly rebellious soul. Nothing has changed.

I heard about Freddy on the news. A “brazen bison” from Lorette Manitoba who “just won’t stay home on the range”. I laughed out loud and immediately remembered Dr. Mooi’s 2016 lecturette on the last buffalo hunt and the truant, rebel bison. The juxtaposition of an obscure New York Times article from 1911 and the hilariously obscure 2018 Freddy story was too much to pass up. I then started to think about distant but related processes and uncommon intersections of historical and contemporary materials. That’s how I got to making a piece that integrates renaissance polyphony with pop chord progressions contemporary speech synthesis and sound design. I use “integrate” fairly loosely in this context. Sometimes it’s like hitting a brick wall, which is part of the fun of such a remote juxtaposition.

So there you have it. Run Freddy Run! Is a uniquely Manitoban mashup that combines old and new, something borrowed and something… brown.  And hopefully by the time you are reading this I have secured an authentic Run Freddy Run hoodi

Brazen bison won’t stay home on the range
Run! Home! Range! Run!
He looks like a bison. I don’t want to be insensitive but they all look the same… you know?

The last big buffalo hunt in the history of the world
Sold to the Canadian government, five hundred head

Freddy’s out. He is just outside his yard on river road
I think people need to remember that Freddy is not a pet and is large and somewhat dangerous.

Just outside my office there is a big, hairy outlaw that can stare anybody down