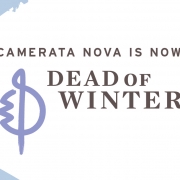 We’re back with a new season and bold new name

As we enter our 2021/22 season, we’re redefining what it means to be a vocal ensemble in the 21st century. For most of our 25-year lifespan, Camerata Nova has described itself as a “group without fear.” Emerging out of the last 18 months of the pandemic, we’ve decided to take this mantra to the next level. We’re entering our new season with a revitalized brand and a bold name change. Camerata Nova is changing its name to Dead of Winter.

“The concept we’re working with is renaissance, or rebirth,” says Andrew Balfour, the ensemble’s Artistic Director of Cree descent. “From an Indigenous perspective, Dead of Winter speaks to recharging and reviving creativity. The concept of “dead of winter” is a strong and positive one.”

The name reflects a shift in artistic direction that our vocal ensemble has been experiencing in the last five years or so. Camerata Nova got its legs performing Baroque and Renaissance music. In-house composer Andrew Balfour has been leading the way in Indigenous classical music on a national level. Our ensemble has been steadily performing more Indigenous, modern and new arrangements of choral music, as well as adhering to our early-music roots.

“From a Settler perspective, Dead of Winter also speaks to a sense of place,” says Anne Janes, Board Chair. “It represents who we are and where we’re from. People outside of Manitoba already see us as ‘Winterpeg,’ and we’ve decided to put our own spin on Winnipeg’s infamous reputation.”

Our ensemble is in a unique position of straddling two worlds; we are a non-Indigenous choir led by an Indigenous artistic director. It is not a simple identity to navigate, especially in the music world. But the new name is an effort to meet this complicated artistic identity head-on, “without fear.”

Dead of Winter’s upcoming season is an invitation to audiences and supporters to embark with us on this new stage of our choral journey. On November 27 and 28, Dead of Winter will perform Celebrating the Carol at Crescent Fort Rouge United Church, our first live performance after 18 months spent in “hibernation.” These performances will be a tribute to our beloved holiday concerts from the past. They will also be offered free of charge to welcome back audiences after the non-existent 2020/21 season.

Dead of Winter’s 2021/22 season will pack some punch in the new year. April 2022 will see the premiere of the Winnipeg Baroque Festival – an exciting collaborative initiative presented alongside local choirs Canzona and Polycoro. Then, our final performance of the season will feature Captive, the highly anticipated third installment of Andrew Balfour’s Truth and Reconciliation concert series. Captive is slated to be performed at the West End Cultural Centre in May 2022; Balfour promises it will be a genre-defying program.

Celebrating the Carol will be performed on Saturday, November 27 at 7:30 pm and again on Sunday, November 28 at 3:00 pm at Crescent Fort Rouge United Church (525 Wardlaw Avenue).

Visit deadofwinter.ca to reserve your free ticket(s) and guarantee your seat(s) to this incredible event!

Learn more about our season and our ensemble at deadofwinter.ca.