Camerata Nova’s landmark concert series highlighting truth and reconciliation with the Indigenous peoples of Canada is returning this November with Fallen, the second of three concerts designed by artistic director and composer Andrew Balfour. As with many trilogies, you don’t need to have seen the first to appreciate the second. 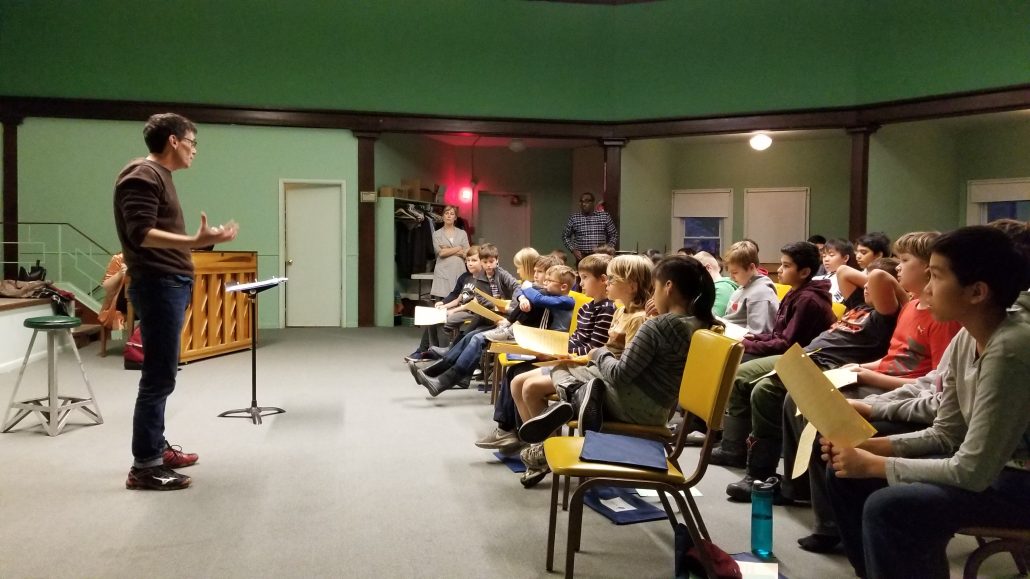 Andrew Balfour leading a rehearsal with the Winnipeg Boys’ Choir

Fallen will be presented on Nov. 3 and 4. The first of the series, Taken, premiered on March 4 and 5, 2017 in Winnipeg before moving out east to be performed in the National Arts Centre’s Canada 150 Festival in June.

Taken – which featured Polaris Prize-winning artist Jeremy Dutcher, hip hop artist Eekwol from Muskoday First Nation in Saskatchewan, CBC reporter and throat singer Madeleine Allakariallak and cellist Leanne Zacharias with Camerata Nova’s chamber choir – received praise for being “innovative, inclusive and thoroughly engaging” (ARTSFILE). It dealt with the subject of Indigenous children being taken from their homes and the stripping of their culture by residential schools.

Fallen continues the conversation of truth and reconciliation with the Indigenous peoples of Canada by exploring the contributions of Indigenous soldiers in the First World War, featuring a choral drama entitled Notinikew (He who takes part in war), written by Balfour. This time around, Camerata Nova will be joined by Indigenous cellist Cris Derksen, traditional drummer and singer Cory Campbell and the Winnipeg Boys’ Choir. The concert, conducted by Mel Braun, will also feature Requiem, a piece by English composer Herbert Howells on the death of his young son.

Balfour’s inspiration for Notinikew was sparked by his love of history, particularly the European wars. “While Indigenous individuals of Canada have fought in every major conflict from the War of 1812 to Afghanistan, they were rewarded for their contributions to WWI by being denied benefits and forbidden to leave their reserves,” said Balfour.

The motivations as to why Indigenous people would fight for a country that eradicated their culture fascinated Balfour. “All war is insanity”, said Balfour. “I wanted to do an anti-war piece, but also question why Indigenous people would go and fight in that war, and what would drive them to sign up and travel overseas and fight in the bloodiest conflict ever at that time.”

“Maybe they went to fight to better their cause at home; maybe they thought if they fought for Canada that our country would reward them with giving them their ceremony or language back. Maybe they had a sense of honour. Maybe they wanted adventure.”

Balfour founded Camerata Nova in 1996 to explore early music – sparked by his love for Renaissance and medieval works – but it wasn’t until years later that he began composing his own music and exploring the power of Indigenous music.

Balfour was a victim of the Sixties Scoop, taken from his Cree family at a young age and placed in the home of an Anglican priest. While he says his home was loving and supportive, it disconnected him from his people, his culture and his music. Through writing pieces for Camerata Nova and researching Indigenous cultures, Balfour rediscovered a part of his identity and learned to embrace his people’s music.

“I didn’t know anything about my language or my heritage, so it’s a process,” said Balfour. “It’s a very important way of reclaiming a lost identity.”

For Sandi Mielitz, president of Camerata Nova’s board of directors, watching Balfour grow as an artist and embrace his identity has been a rewarding experience.

“I’ve seen a guy with a huge amount of musical talent who then took it and learned how to not only evolve his music into something more and more sophisticated and abstract, but also evolve his whole identity,” said Mielitz.

While the struggles and triumphs of the Indigenous peoples of Canada can be researched through spoken and written works, Balfour and Mielitz agree that music provides another layer of connection for audiences to understand their experiences.

“When a story is told in music, it touches you in a way that dry facts just simply don’t,” said Mielitz. “All of the arts have a way of touching you and emotionally engaging you in experiencing stories.”

“The legacy of storytelling is so important, and I feel that the power of music or word or dance or visual arts are really important for people to either heal or explore their own wounds and legacies through art,” Balfour agreed. “The idea of doing these call-to-action concerts has been very important for myself as an artist and our community.”

Camerata Nova’s rehearsals are well underway, and for Balfour, the journey from looking at notes on a computer screen to hearing them sung live by the full chamber choir is an exciting one.

“It takes a lot of work, but we have an amazing organization and we have people, mostly non-Indigenous, that realize the importance of this, and that’s the country that I want to live in,” said Balfour. “Where people are healing or helping the healing or listening, because that’s really the most important thing. Particularly politicians – they need to listen.”

Fallen takes place at 7:30 pm on Nov. 3 and at 3 pm on Nov. 4 at Crescent Fort Rouge United Church (corner of Nassau and Wardlaw), with pre-concert talks 45 minutes before both shows*. The third and final concert of the series, Captive – a piece on Indigenous peoples’ incarceration – will be presented in 2020.
-Graeme Houssin